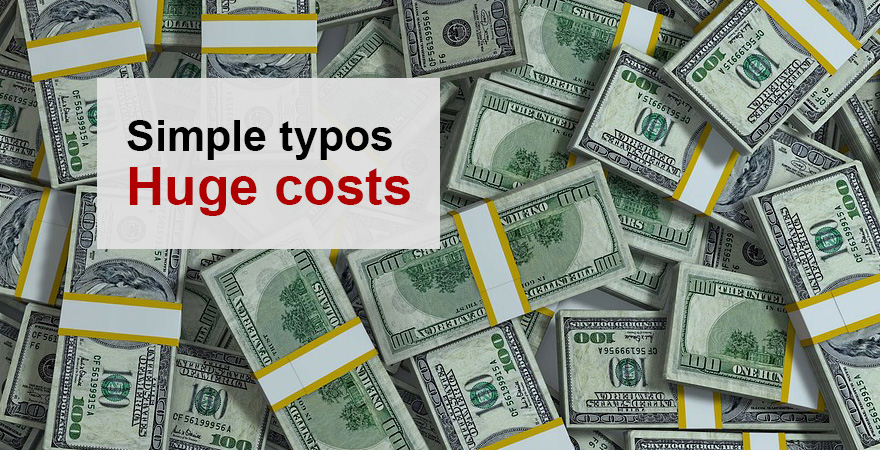 Typos are embarrassing. And sometimes they can cause a whole lot of trouble. One single character or punctuation mark in the wrong location can result in catastrophic losses or have devastating consequences. Here are the top 10 most expensive typos of all time.

In 2013, Texans got the deal of a lifetime when a misprint in a Macy’s mailer advertised a $1500 necklace for just $47 instead of $497. The necklace quickly sold out at the local Macy’s before the typo was caught and the retailer had the chance to place corrected signs in the stores.

The damage: We can’t offer an exact number since The Company did not disclose how many lucky customers managed to purchase the necklace.

In 2007 an eBay seller was auctioning off one of the rarest beers in the world: an antique case of 150-year Allsopp’s Arctic Ale. When he made the listing, he misspelled the name of the beer. He wrote “Allsop’s” instead of “Allsopp’s.” The missing “p” in the name of the brewing company made it difficult for collectors to locate the listing using the keyword search function. One eagle-eyed bidder came across the rare booze, purchased it for $304, and then immediately re-sold it for $503,300.

In 2006 Alitalia Airlines offered business class flights from Toronto to Cyprus for $39 instead of the usual $3,900. Around 2,000 travelers took advantage of the rates before the mistake could be corrected. When the airline tried to cancel the tickets, they suffered a massive backlash from their customers. To protect its reputation, Alitalia decided to cut its losses and allow the budget ticket holders to fly.

In 2009 The British Government accidentally listed Taylor & Sons Ltd., rather than Taylor & Son Ltd. as a failing business approaching liquidation. This extra “S” in the name of the report confused the company with a respected 124-year-old Welsh engineering firm that employed more than 250 people. To make matters worse, the company’s managing director was on vacation at the time, causing clients and creditors to believe he had fled the country as his company collapsed.

In less than three weeks, Taylor & Sons lost the majority of its clients, and 3,000 of its suppliers canceled their contracts, forcing the company into bankruptcy two months later. The British High Court later ruled that the government registrar was directly responsible for the collapse of the company.

The damage: Taylor & Sons were awarded nearly $14 million in compensation in 2015.

The US Tariff Act of 1872 was intended to remove tariffs from “Fruit-plants tropical and semi-tropical”, but a clerical error substituted a comma in place of the hyphen when the bill was being duplicated, so it read “Fruit, plants tropical and semi-tropical”. That rogue comma meant all tropical fruit and plants were free of charge. The government did eventually correct the typo, but did so after two years of lost revenue.

The 2013 Miss Universe Canada contest ended in an emotional victory for Denise Garrido. The next day during the validation of the computerized scoring results, a typo was discovered in the top five entries, which significantly impacted the final results of the competition.

As it turned out, Garrido was actually the third runner-up in the competition, and the real winner was Riza Santos. The organizers issued an apology, and Garrido gracefully handed over her crown.

The damage: Like Denise said “You go through this complete high and your entire family, and the town is celebrating, wishing you congratulations. And then 24 hours later, you’re told, ‘Oh, by the way…'”

The national mint of Chile misspelled the name of its own country on a series of 50-peso denomination coins in 2008. More than 1.5 million coins bearing the name “CHIIE” instead of “CHILE” were released into circulation, and incredibly, the spelling error was only formally reported in late 2009.

The damage: Not measured in monetary terms, but the coins were a source of global humiliation and fostered the perception of incompetence by the Chilean government.

In 1962, NASA built the first interplanetary probe, the Mariner 1. Its mission was to do a fly-by of Venus and send back data about our closest neighbor planet. The problem was that a missing hyphen in the codes transmitted a series of incorrect course correction signals that threw the vehicle off its flight trajectory. The range safety officer had no choice but to order the intentional detonation of the spacecraft less than five minutes after liftoff to prevent the vehicle from crashing into a populated area.

The damage: $80 million and a significant blow both to national morale and to the prestige of the space administration at a time when the United States was losing the space race.

As you can see, typos are not only embarrassing, but they can also be costly. That’s why all of our transcription projects undergo a quality check by our in-house production staff before delivery to the client, so we can offer 100% guarantee of satisfaction or no charge—no ifs, ands, or buts.

Looking for more examples of why punctuation in transcription is important? Check out The case of the $10 million comma

2 thoughts on “Top 10 Most Expensive Typos in History”